So, a recent episode of The Best Thing I Ever Ate on Food Network was titled “Ice Creamy.”  As you have probably guessed, this episode was all about the best ice cream-type treats that could be found around the country.

As happens whenever I watch this show, I started to think about what would top my list.  And this one was really hard.  I tried but could not narrow it down to just one.

I decided it was time for some blueberry cobbler.  I found this recipe on  Food Network and decided to give it  try.

It was super easy and quick to put together (which is always a plus if you are planning on turning on the oven when Weather.com says that it is 100 degrees outside).  I changed the recipe up a bit by adding more blueberries than were called for and I also added a splash of orange juice.  Why?  I want to use up as many berries as possible and orange juice is yummy with blueberries.

Usually, I don’t fiddle around with baking recipes too much because baking is based on chemistry that I don’t actually understand and I am usually pretty worried that whatever I add will actually alter the chemical reactions somehow.  This time, however, I figured that even if it didn’t look good it would still taste ok. 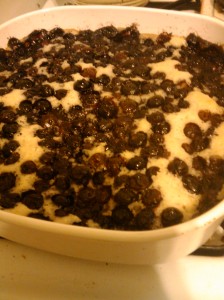 The look is a little different from other cobblers because it is so full of blueberries.  Since there isn’t as much space for the dough, it didn’t have the chance to get very golden on top. 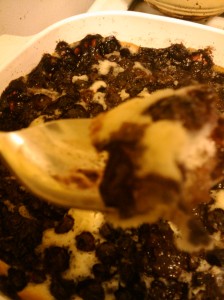 I’m going to go ahead and pat myself on the back for the addition of orange juice.  The cobbler is nice and sweet from the blueberries and the sugar but it also has a nice bit of tartness from the orange juice.  This actually turned out quite nicely.

What do you do when you have an abundance of summer berries?

I love summer vegetables and summer fruit.  Not only do they always instantly remind me of the warm summer months, but they rarely require that you do anything to them for them to be delicious.  Fresh cherries are rarely better than right out of the bowl.  A zucchini sliced up and lightly sauteed or thrown on the grill?  Delicious.  I usually feel like it is best to keep summer foods as simple as possible.  Plus, who wants to turn on the stove when it’s this hot? 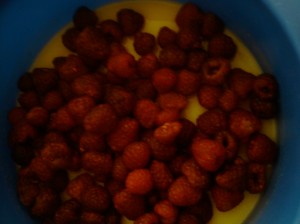 Lots of restaurants in Chicago have prix fixe dining deals. If you are unfamiliar with the concept, if you are dining with a prix fixe menu, you pay a set price and pick from two choices for each of your courses. It’s usually a lot cheaper than choosing three courses from the regular menu but the food will still be on par with the the rest of the menu.

I love finding prix fixe nights at restaurants because I love getting a really great deal. If I can get a really great deal and still get a really great meal then I am very happy.  Dining with a prix fixe menu also forces me to try new things.  I tend to order the same types of foods no matter where I am dining.  If there are only two options and neither are items that I would normally choose, I get to try something entirely new and different.

A restaurant opened in our neighborhood that exists solely under the prix fixe concept. In fact, it’s name is Prix Fixe. It is exactly what you would expect. The menu is prix fixe. That way it can change frequently.  Our server informed us that if we returned in two weeks that the menu would be different again.

I love my neighborhood but one thing that we have been lacking is “nicer” restaurants where you can get a “nicer” meal.  This one fits the bill.  The food was yummy.  The wine selection (although I didn’t have any) was pretty strong.  The restaurant was small but cozy.

I’ll be back again.  In two weeks?  Who wants to join me?